A mother has brought a birth injury medical malpractice lawsuit against the Naval Medical Center in San Diego after her infant child was diagnosed with brain damage the mother alleges was caused by a delayed decision to perform a caesarean section.

According to the lawsuit, the mother went to the Naval Medical Center at San Diego for labor and delivery on February 26, 2013. She had been experiencing contractions for about two hours and vaginal bleeding for about four hours. She also reported that she had noticed a decline in the number of fetal movements. The plaintiff was admitted to the hospital for the evaluation of the possible premature separation of the placenta. At the time, she was at 33.5 weeks of gestation. Because of her current medical issues and because she had a previous history of two premature births, the mother was considered to have a high-risk status. However, according to the lawsuit, she was not monitored continuously despite the risks to her child’s health.

On the morning of February 28, the mother’s medical records indicated that there was an immediate need to deliver the child. The attending staff noted this urgency at 8:00 a.m. However, according to the lawsuit, “the physicians and nurses inexplicably waited until nearly 10:45 a.m. to deliver (the child) by C-section.” 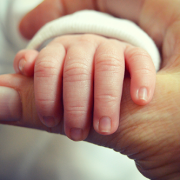